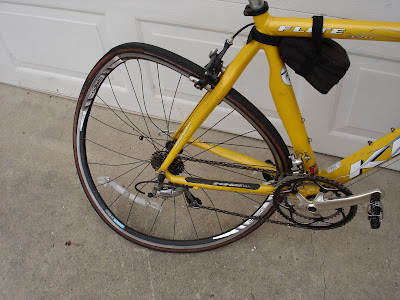 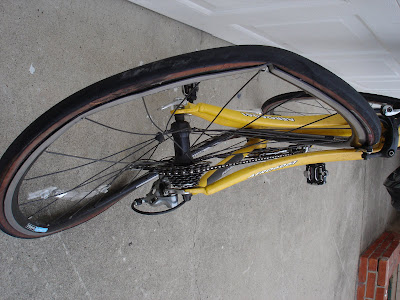 Mr. Glenn Hall of San Diego decided to run me over last Thursday. A long story short, after having the right of way and standing my ground, Mr. Hall decided to get back in his Ford SUV with the license plate 'FORD-AWD' and hit me as he was going around the corner. If you ask me that's assault with a deadly weapon. Since I don't have any real injuries except for some cuts on my legs where I fell to the ground, the lawyers that I have been talking too don't seem to think I have a lawsuit other than the original amount for the bicycle. The accident was directly in front of a police station to boot. I have filed a claim with his insurance agency and hopefully I will get a settlement soon so I can get a new bike. The estimate was for $800. I should demand to get paid in Euros or Pounds just like some celebrities tired of the Bush driven US economy. The bike doesn't look that bad in the pictures, but basically all of the components need to be replaced to get the bike back to normal....so I'm thinking about a new bike. I wish there was someway to penalize Mr. Hall other than his premiums going up 10 bucks a month. He should have to ride a beach cruiser around San Diego as his only form of transportation for a month to humble his lead foot and hot head. I'm just waiting to hear from the insurance agency to see how much I'll get. He thought I should be riding on the sidewalk and I should have promptly moved from his way. Well, at least the police informed him that bicyclists have the SAME rights as cars and have to follow the same traffic laws. Not to mention it is unsafe and illegal to ride on the sidewalk. It would be nice to have driving tests address the issues of cyclists. It's a shame that people don't have any idea about the laws regarding bikes. Thanks to Kathy at sdcbc.org for helping me with legal issues and advice. The San Diego County Bicycle Coalition is dedicated to bicycle advocacy and making improvements for riders.
Posted by Chester Schambleton at 12:04 PM

Hello. This post is likeable, and your blog is very interesting, congratulations :-). I will add in my blogroll =). If possible gives a last there on my blog, it is about the Monitor de LCD, I hope you enjoy. The address is http://monitor-de-lcd.blogspot.com. A hug.

Hello. This post is likeable, and your blog is very interesting, congratulations :-). I will add in my blogroll =). If possible gives a last there on my blog, it is about the Home Theater, I hope you enjoy. The address is http://home-theater-brasil.blogspot.com. A hug.